LŌĆÖHermerel was built at the site of the castle of Gefosse. The first castle was built during the V┬░ century by a saxon called Guervald. It was an ideal place : sailing, farming, proximity of the sea and of a big natural port (today over) : ŌĆśLe Havre de la DuneŌĆØ.

The oldest part is the chapel, built at the end of the XV┬░ century. Indeed, the castle (V┬░ century) was fully destroyed at the beginning of the hundred years war (in the middle of the XIV┬░ century). In fact, this castle was destroyed because of a war between two norman lords. Geoffroy DŌĆÖHarcourt who was a rich and powerfull lord, wanted to get married with Jeanne Bacon. She was a young girl who was soft, pretty and very rich ; indeed, she was the heiress of the lord Bacon in Molay-Litry. However, JeanneŌĆÖs father dead just few days before the wedding day. Then, she went to see the bishop of Bayeux and she told him all her sadness : his father was dead and she had to marry Geoffroy (35-years-old), who was for her a old lord awfull and impulsive. So, the bishop gives her an advice : she could marry a young lord (called Briquebec) who was the bishopŌĆÖs nevew! When Geoffroy learnt this new, he was really furious : he allied with english who disembarked at Saint Vaast la Hougue. A part of the english army commanded by Huntington and DŌĆÖHarcourt disembarked in the Baie des Veys and destroyed all the castle in the land of Isigny which belonged to the BriquebecŌĆÖs family.

And this castle was converted in a working dairy farm. 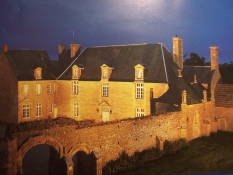 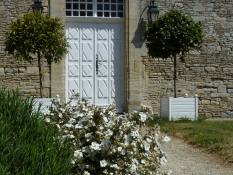 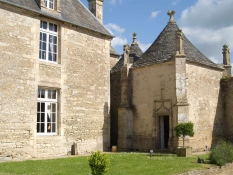 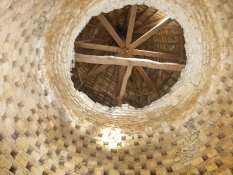